History of the Parish

St. Sophie parish ("Sophie" means "wisdom of God") was formed in 1925 when 15 people joined to form a Ukrainian Orthodox Brotherhood. They worshipped in the Syrian Orthodox Church at 54 Notre Dame St. East.

Fr. Semen Sawchuk, Head of the Ukrainian Orthodox Church in Canada (UOCC) performed the first Liturgy in the Ukrainian language at this church in June 1925. The parish bought a building on de Lorimier St. near Ontario St. in order to have a Church of its own. It was consecrated in 1929. Fr. Volodymyr Sluzar, celebrated the first Divine Liturgy of the newly-formed parish. In 1931, the Quebec government granted a charter to St. Sophie parish. Fr. Sluzar directed the parish for 48 years.

As the membership increased, it became evident that a larger building was needed. In 1954 a large lot on the corner of Bellechasse and Blvd. St. Michel was bought, as many Ukrainians had settled in the Rosemount area. On this corner, overlooking farmlands and fields, an imposing church was built in the traditional Byzantine style, designed by architect V. Sichinsky. He used the Cathedral of St. Volodymyr in Kyiv as his model. Later a residence for the parish priest and one for the caretaker were also built on the property. The buildings were completed in 1962 and the church was consecrated by Metropolitan Ilarion and Archbishop Michael and was designated a "sobor". In 1988, St. Sophie was elevated to the status of "cathedral."

In 1988 the Makarenko Studio of New York decorated the sanctuary with icons. The nave area of the church was repainted in 2007. Necesary renovations are continuing.

We cherish our ancestral heritage and the Ukrainian language and culture which we strive to preserve in our parish life.

St. Sophie Cathedral is a member of the Eastern Eparchy (division) of the Ukrainian Orthodox Church of Canada, which has its headquarters in Winnipeg. Its newspaper, "The Herald", is sent to all members each month. We gather to worship during the Divine Liturgy on Sundays, certain weekdays, and holidays. Our faith in God's goodness and the desire to gain His Grace unites us in prayer. Friendship, peace and the opportunity to grow spiritually in Christian love and to unite with Him in the holy mystery of communion - these are the aims of our parish. Come to God's house and find strength in His blessing, which is given to all. 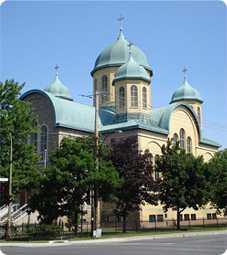